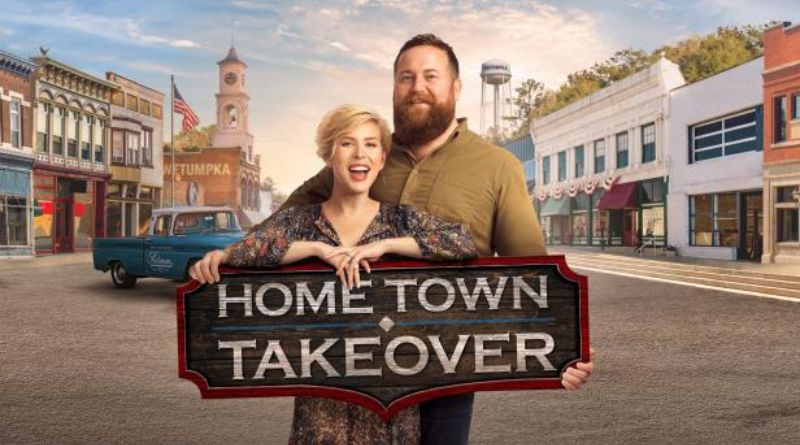 When HGTV’s Home Town Takeover came to the small town of Waynesboro, Virginia, homeowner Lisa Lunt knew that she wanted to make over her entryway, but she had no idea just how much it would change the feel of her home. Before the redesign, her entryway was dark and unfinished. Now, thanks to the DIY experts from HGTV, Lisa’s entryway has been transformed into a bright and welcoming space that serves as an invitation to all visitors. Watch this video to see the dramatic change!

What the homeowners did wrong

When the homeowners first bought their home, they knew the entryway was dark and unfinished. They were hoping to add some finishing touches to make it more welcoming, but they didn’t want to spend too much money. So, they left it as is. Unfortunately, this made the space feel even more unwelcoming.

Now that HGTV has taken over the house for its show Home Town Takeover, our team of designers stepped in to help them finish off their new home! First, we painted the walls with a fresh coat of light gray paint to brighten up the space.

Then we added crown molding so it would look like an inviting entryway. Finally, we took out all the old carpeting and replaced it with hardwood floors for warmth and character. The homeowners couldn’t be happier with how their finished entryway turned out! From being dark and unfinished to bright and welcoming, this space now feels warm and inviting. Plus, the hardwood floors give it tons of character.

And at only $6,000 – $8,000 dollars (including labor), it’s worth every penny! What did you think about HGTV’s Home Town Takeover? Would you want us to come in and design your entryway? Share your thoughts on social media using #WishYouWereHere.

What HGTV did right

HGTV’s Home Town Takeover did a great job of taking this unfinished entryway and turning it into a bright and welcoming space. They added some much-needed light fixtures, painted the walls, and added some stylish decor. Plus, they also installed a new front door to really make the space pop.

The end result is an inviting entryway that makes you want to come inside. And with just $1,500 invested in supplies, it seems like a small price to pay for such a major transformation.

But it wasn’t all easy going for the H2O crew. At one point, Jason said he had to take his tools back home because he was so frustrated with his progress on the front door.

So what happened? Turns out, he was drilling into old railroad ties instead of pressure treated lumber! Oops! It was also difficult finding suppliers since they were working in a town where not many companies are based. But overall, we think this remodel looks amazing!

And when comparing these before and after shots, it’s clear how far the project has come. Not only does this entryway now look brighter and more welcoming, but those awesome DIY projects created by HGTV will give homeowners plenty of ideas for their own spaces. That rustic board and batten wall went from plain jane to showstopper status thanks to paint, reclaimed wood, clapboard siding, and faux finished joints.

Plus there’s even a barn beam mantel holding up the TV stand. But Jason might have been the most thrilled with his work here—even though there were a few setbacks along the way.

But as it turns out, painting was the biggest hurdle during this remodel. What should have taken 2 weeks ended up being 4 weeks long because of waiting times at suppliers and paint lines getting backed up due to weather conditions. Luckily, Jason was able to salvage the situation with a clever solution. He bought 12 gallons of white paint and mixed it with water so that he could stretch the amount of time he could use his roller without having to get fresh paint each day.

Then he sprayed down everything else around him while waiting for the primer coat to dry! With all those paints mixing together, things got pretty crazy pretty fast. But in true Jason fashion, he made lemonade out of lemons by throwing on some tunes and dancing around as if no one were watching (or judging). Now that’s dedication.

The results speak for themselves

The results of the HGTV Home Town Takeover are truly amazing. The entryway went from being dark and unfinished to bright and welcoming. The transformation is truly amazing. Plus, the new space is much more functional and inviting. Now it can double as a mudroom with an area for shoes, hooks for coats and keys, shelves for hats and gloves.

The finished product makes it easy to come in from outside after work or on weekends and relax by taking off your boots or grabbing your coat before heading into the rest of the house. It also creates a spot where guests can remove their outerwear if they want to hang out inside but don’t want to go up the stairs right away.

No matter what time of year, the room will be beautifully lit during the day thanks to all that natural light flooding in through the windows at either end.

If you’re feeling stuck with an unfinished space in your home, take some inspiration from HGTV’s Home Town Takeover. In just a few simple steps, you can transform any room from dark and dreary to bright and welcoming. Here’s how to do it!

– Use paint or wallpaper as the backdrop for the new entryway by painting or wallpapering one wall that is visible when entering the space.

– Choose a pattern or color scheme that will fit into your home’s overall design style.

– Place a mirror on the opposite wall so that it reflects light back into the room and make the entryway feel larger than it actually is.

– Add natural light by opening up one side of the room and using windows to bring sunlight inside.

– Hang artwork on either side of the door, keep it fairly minimal so as not to compete with what is already there (i.e., mirror). – Arrange furniture such as couches and chairs so that they are all facing the entrance way.

– When possible, build out the entrance way with built-in cabinets or shelves for storage.

– Use artfully placed lighting fixtures throughout the room to create interesting shadows and patterns.