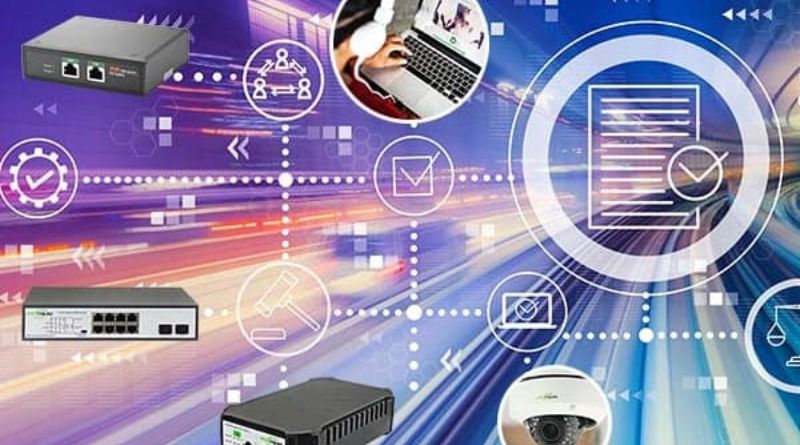 What Is Power Over Ethernet (PoE)?

Power over Ethernet is a cutting-edge technology used to provide both power and data to powered devices (PDs) on a local area network (LAN) over a single Ethernet cable. PoE comes in four levels of power that are defined by the IEEE as 802.3af, 802.3at, and 802.3bt standards.

While PoE has many benefits, such as cost-saving, reliability, safety, and flexibility, it does have a major limitation: a distance limit of 100 meters (328 feet).  Many LANs need to cover much larger distances (think sports venues, hotels, academic campuses, shopping malls, etc.).

The solution for this distance limitation is the PoE extender.

What Are Ethernet Extenders?

The PoE extender (sometimes called a PoE repeater) is power-sourcing equipment (PSE) that increases the distance a network can reach. This device is installed inline between the PoE switch and the PDs in the network, which significantly increases the physical distance. In fact, some PoE extenders can be “daisy-chain” multiple PDs up to 500 meters (1,640 feet).

How Does a PoE Extender Work?

A PoE extender receives power and data from the PSE (usually a PoE switch) it is connected to. The extender then uses a bit of the power it receives to operate itself (roughly four to five watts).

For example, if the PoE extender is connected to an IEEE 802.3at PSE, approximately 25 watts of power will be sent to it. It then uses five watts to operate on, leaving 20 watts of power available for the connected PoE devices (PDs). Should you daisy chain PoE extenders for further distance, each one will use five watts for itself, ultimately depleting the power supply to the PDs farther down the line.

How to Set Up a PoE Extender

Most PoE extenders are easy to set up because they are plug-and-play.

At this point, you should assemble the additional PoE extender to function as the destination unit. Flip the dip switch to Remote Terminal or RT to allow the gadget to operate as the destination. The LED RT indicator lights up.

Upgrading your LAN with new technology can be a daunting, time-consuming, and expensive task. PoE extenders help you bypass these challenges by providing connectivity over existing ethernet cables.

Transitioning to PoE technology is cost-efficient and prolongs the lifespan of your wiring infrastructure.