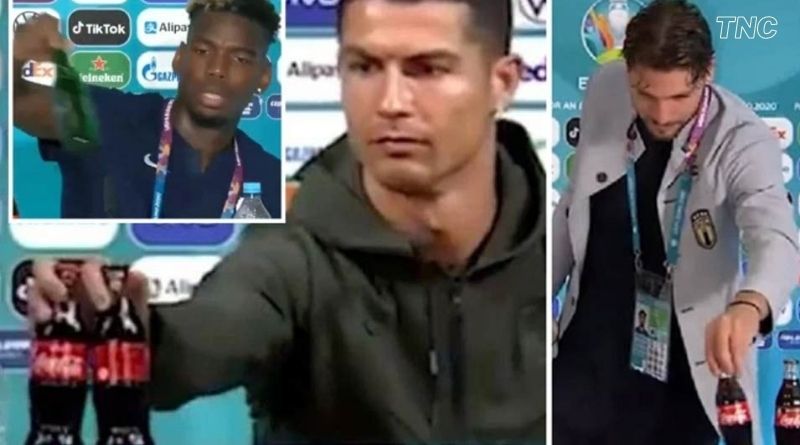 UEFA warns players not to remove sponsored drinks in the press conference, the player of any team who removes the bottles of drinks provided by the sponsors will have to pay a heavy fine.

The Union of European Football Associations (UEFA) has issued a warning about the removal of bottles of sponsored drinks by players at press conferences during Euro Cup 2020. UEFA issued a warning that during the press conference, any player, who removes bottles of beverages provided by sponsors from the table will have to pay a hefty fine.
Cristiano Ronaldo, a 36-year-old Portuguese footballer who arrived for a pre-match press conference on Monday, removed Coca-Cola bottles and placed a bottle of water in front of him, after which Coca-Cola’s share price plummeted. It lost 4 billion.

The next day, Paul Pogba, a 28-year-old Muslim midfielder from France, removed a bottle of beer from in front of him at a press conference.

On Wednesday, Italian footballer Manuel Lucatelli also replaced Coca-Cola bottles with water bottles. In the aftermath of the Euro Cup, UEFA took action and warned the teams: “Sponsors and partnerships are an important part of promoting football and hosting tournaments across Europe. The players are bound by the rules and regulations of the tournament under the contract and if they do not do so, disciplinary action may be taken. However, UEFA will not impose direct fines on the players, but on the teams.