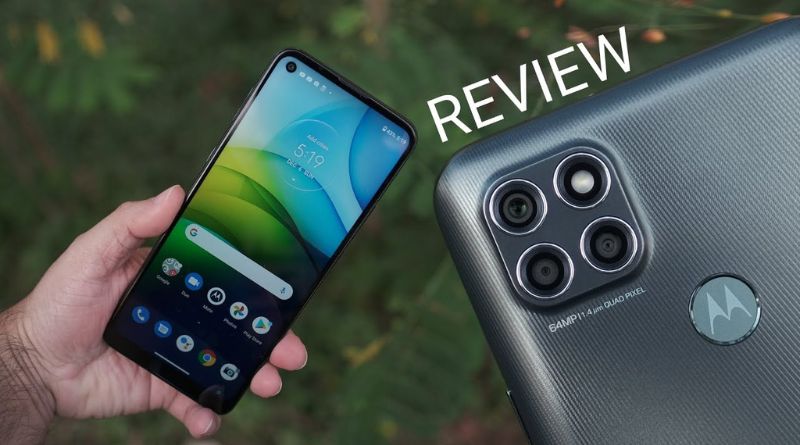 The latest smartphone from Motorola, the Moto G9 Power, offers all the latest features at an unbeatable price. With its 5,000 mAh battery, you’ll be able to get through at least two days without having to charge your phone. The Moto G9 Power also has dual cameras and modern features like face unlock and water resistance that many phones at this price don’t have. If you want a well-rounded phone that won’t break the bank, this is it!

The 5.7-inch screen provides an enjoyable viewing experience, with great contrast and accurate colors that also happen to be HDR. The one noticeable difference I found is in the contrast when displaying images. Motorola’s camera app produced images with less contrast and less accurate colors than what we see on other phones like the Galaxy S8+ or Pixel 2 XL. If you compare the black, red, green and white stripes in an image on the Moto G9 versus an image from those two phones, you’ll notice that the black bar on each stripe is not as dark on this phone as it is with others.

As long as you’re not planning on using your new phone for serious photography, this shouldn’t be too much of an issue. For example, if you take pictures of people on a night out and the lighting isn’t perfect, there’s going to be some noise around the person’s face which won’t appear on photos taken with better quality cameras.

One of my favorite features about the display is that the brightness automatically adjusts based on ambient light, which helps conserve battery life while still providing visibility. With the brightness set at 100%, I was able to comfortably use the phone outside during daylight hours without any strain on my eyes.

It’s important to note that even though these phones have Gorilla Glass 3 protection, they are not water resistant so make sure you don’t drop them in water. Camera: Although the camera performs well outdoors, its performance indoors is lacking. During a recent trip to China Town in NYC, shots indoors were blurry and grainy whereas shots taken outdoors were crisp and clear. In another instance where there was no direct sunlight available but adequate indoor lighting, indoor shots were grainy again but this time without any blurriness (which may just be because of how close the subject was).

For my purposes, I really enjoyed the battery life of the Moto G9. In my heavy usage days, where I am consistently on Instagram, Snapchat, Twitter and Facebook all day, as well as watching YouTube videos every now and then – which drains battery life quickly – I was able to make it through the whole day without recharging. To me this is impressive because with other phones I would need to charge in the afternoon or else risk running out of power before I went to bed.

The Moto G9 Power also has fast charging capabilities so even if you do run out you can plug it in for a few minutes and get back up to full strength in no time! It’s much easier than having to wait hours like some other devices on the market currently do. All around the battery life on the Moto G9 Power is great, but it also gives me that peace of mind knowing that I’ll be able to use my phone more often without worrying about whether or not there will be enough juice when I’m ready to go.

The Moto G9 Power comes with 64GB of storage and 4GB of RAM, more than enough to let you play games and browse the internet without any hiccups. The 8MP camera also does a solid job at taking some decently high-quality photos and recording video at 1080p. The phone is equipped with Corning Gorilla Glass to help protect it from cracks or breaks if you accidentally drop it. It has an enormous 3,000mAh battery that can last up to 48 hours on just one charge, and fast charging technology that ensures you don’t have to wait around too long when your battery runs low.

The only real downside is that there’s no headphone jack, but there are USB-C earbuds included in the box which will work fine for most people. Overall, I would recommend this phone as a great option for anyone looking for a budget smartphone. It might not be the fastest or best performing device on the market, but for less than $300, it gets the job done nicely. If you’re someone who’s constantly scrolling through their Instagram feed or playing mobile games all day, then this phone will make sure you never run out of juice.

The Moto G9 Power is a mid-range phone, with lots of high-end features. It has a six inch display and is also water resistant. It offers 128 GB of storage, which can be increased to 256 GB by adding a microSD card. The rear camera offers decent quality images and 4K video, but the front facing camera is subpar. However, it runs on Android 9 Pie and is compatible with almost any carrier. If you’re looking for a good all around smartphone at an affordable price, this is the one.